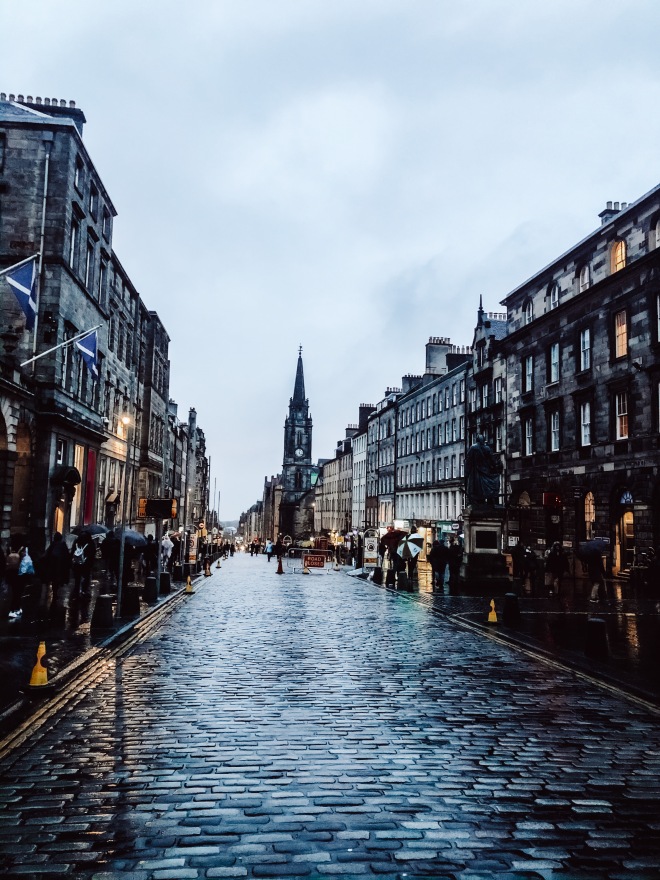 EATING OUT IN EDINBURGH

Maybe I’m late to the party, but I had no idea how cool Edinburgh was until my recent last-minute dash.

When ‘corona’ was just a beer you drank on a tropical holiday, we naively thought that with a few ‘big’ trips coming up, we should stay local to the UK for our monthly away weekend. Rye and Sandwich were top contenders, given the ease of the train journey but it turns out there isn’t a whole lot to do by the seaside in the middle of winter in England.

So, we booked flights to Edinburgh at 10PM on Friday night, and flew out of Gatwick at 7AM the next morning. Given our lack of preparation, I wish I had had a handy guide to what to do, see and eat, so for those of you as flippant as we were that weekend, here goes…

Edinburgh is a city that, in all fairness, I didn’t know a lot about. All I had to go off was the tense rivalry between two of my colleagues, one of whom was a fierce Scottish patriot and the other who described Edinburgh as ‘the dreariest, rainiest city on earth’.

My first impressions of Edinburgh were that yes, it was indeed dreary and rainy, but the gothic architecture made this all the more atmospheric and secondly, that the weather was completely juxtaposed by the sunny disposition of the Scots, who were some of the loveliest people I have encountered in my travels.

We flew direct from London on Flybe, which sadly went into receivership 2 days after we flew. Flight time is about 1.5 hours.

There is also a train service direct from London to Edinburgh. Travel time is about 5 hours from Kings Cross St Pancras and the train drops you in the centre of Edinburgh.

Once we arrived at the Edinburgh airport, the lovely lady at the information counter informed us that the best way to get into town was using the Edinburgh Tram service (25 minutes / /8 pounds for a return ticket). There is a bus service too.

We stumbled upon this brand new gem by chance on Booking.com, and couldn’t have been luckier. The hotel was cheap as chips (although rumour has it the prices soar during the Edinburgh Fringe Festival), there was champagne on arrival and some of the best views in Edinburgh. Even better, while having all the trappings of modern hotel design, each room was accented with elements of Scottish culture (they are very proud of their many variations of tartan, and most Scots we spoke to could identify a tartan from a mile away).

Not only that, but the rooms came fully equipped with a GHD and hair curler, and some of the most Instagrammed beauty products you’ve been wishing you could put your mitts all over (apologies to the hotel staff, who would have found the amenities ransacked of all products after our departure). The hotel is across the road from the train station and a stone’s throw from the Royal Mile. In any case, Edinburgh is fairly small and therefore infinitely walkable.

10/10 would recommend a visit to the Rooftop Bar and Champagne Lounge even if you don’t stay at the hotel (Level 7).

The list of ‘to do’ things sent to me by my colleague, who was once an Edinburgh local is as follows:

The main street of Edinburgh’s Old Town and worth getting lost on for the architecture alone. For the most part, it comprises store after store selling endless variations of tartan but the atmosphere on a broody, dark afternoon reeks of Wuthering Heights, and the bagpipe serenade makes for an atmospheric experience.

This is a “must-see” Edinburgh experience. Free tours run every half an hour and take you through the history of the Castle following its construction as a hill fort during the Iron Age, through its role as a military base and royal residence, including by Mary Queen of Scots.

Edinburgh Castle, Castlehill, Edinburgh EH1 2NG (ie the top of the Royal Mile. You can literally see it looming over you from everywhere in Edinburgh though). Entry costs 19 pounds however tours are free.

While you wouldn’t normally catch me seeking out an art gallery in a new city, we stumbled across the Scottish National Gallery and Portrait Gallery and were not disappointed. Free entry to get up close and personal with some of the world’s best artworks (think Vermeer and Rembrandt, which certainly jogged my Year 7 art class memories), I would recommend even just a quick squiz at what this has to offer.

Highly recommended from some locals at our hotel was Bar Prince at the Balmoral, a stunning Victorian hotel which is the centrepiece of the main street. Testament to how friendly the locals are, we got chatting to a couple in their 70s and had a roaring time. Given how many drinks we had there I think I am qualified to say that the cocktails are fab.

Other recommendations include Panda and Sons (a hidden speakeasy), Raging Bull, Edinburgh Grand, Paradise Palms, Bar Soba and Cold Town House (which has great views upwards Edinburgh Castle although I can’t imagine how enjoyable this would be in the thick of winter).

Pubs are also popular in Edinburgh, as in most of the UK. The Scotsman looked great as did the Royal Mile Tavern , Bramble Bar and the Jolly Judge, and we escaped the weather at Deacon Brodie’s Tavern (who is somewhat of a local celebrity and there are multiple watering holes named after him).

Here’s a hot tip: get in early if you’re brunching on a weekend. We wandered up after checking out of our hotel at 11AM and breakfast was over at most places.

Had we had the chance, I would have liked to try The Lookout by Gardener’s Cottage, a bit further afield but it looks great and was difficult to get into! Or Aurora.

We had a pub lunch, but had I had my own way, and based on recommendations and a peruse of Google I would have liked to have tried:

Carved out of an authentic brick warehouse dating back to the 19th Century when it was built as a props and costume store, Timberyard is found a 5 minute stroll down the hill from Edinburgh Castle (be warned that walking back up the hill in the rain after dinner is a dangerous endeavour).

The ingredients here are supplied by local artisan growers and foragers and the menu is a daily tasting menu that can be comprised of 4,6 or 8 courses with matching wines (be warned it can be exxy). The atmosphere is second to none, the food great and the service impeccable.